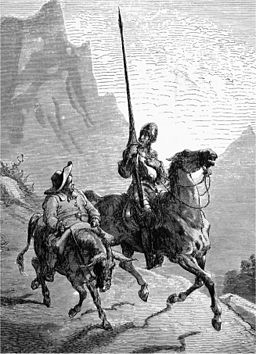 On Google+, the ultimate nerdkingdom for roleplayers, there’s a pretty interesting discussion going on at the moment. Initiated by a man with a big mouth and a hefty ax to grind, “RPGpundit”, this argument goes something likes this:

Others, joining the commentbait: Ah, no. Actually, there’s AMPLE proof that Appendix N was referenced back in the days. Appendix N was sort of a common ground for early wargamers and roleplayers. Nobody said it was a holy script. You just made that up.

Man w/the ax: There never was a “one true old school”, as you are claiming!

Man w/the ax: This all is happening because the whole clonemania OSR-Taliban crowd LOST. But as for you guys, you can claim “no one is saying that” but at the same time when I posted a blog not that long ago pointing out the importance of all the other appendices of the DMG, your whole crowd went apeshit insisting that no, Appendix N (the one least useful in actual play by far) is totally the most important one.

I could write a two-word summary of this discussion: Strawman argument. Period. That’s what it is. RPGpundit (ironically a man I agree with on many levels when he is sincere in his writings, not just trying to stir some shit like now) attacks a remark someone made. In this case the remark is: “Appendix N is the single most important page in all of D&D”.

The problem with this is: Nobody made that claim, ever.

RPGpundit is attacking something that nobody ever said. A classic strawman argument (by the way one of the predominant figures of speech of politically left-leaning folks, which strikes me as kind of funny, considering RPGpundit’s conservative online persona).

If he left it at that, I’d be willing to say, alright, he tried some rhetorics, it didn’t work out, point taken, let’s move on. But unfortunately, it seems like he really wants to make a point because he attacks again. But this time, he changes targets: enter strawman #2.

Suddenly, the fact that nobody ever said what RPGpundit claims they said, makes room for “you all went apeshit when I said all the other appendices of the DMG were important”. This is a turn that makes me shake my head in disbelief. Who is this mysterious crowd? I certainly didn’t go apeshit, neither at home, nor online, because of an online comment. So, this generalization has hit the wall already. It isn’t true. Who exactly are “the clonemania OSR-Taliban crowd”? Again, a glaringly obvious generalization that does nothing to strengthen his argument.

The problem I have with this: RPGpundit’s fervor and furor to “expose” non-existent “frauds” and “OSR-Taliban” strikes me as strangely quixotic. He’s chasing windmills/strawmen, and I’m having my doubts that he’s playing a role at the moment. I think he really means what he’s writing, and THAT makes me a bit sad. The OSR could need more solidarity at the moment. Stuff like the RPGpundit’s only deepens the rift.