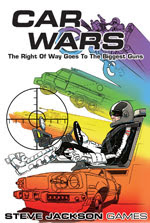 Before you continue, please do yourself a favor and download the digital edition of Car Wars Classic from the official publisher here: http://www.sjgames.com/car-wars/games/classic/img/car-wars-classic-rules.pdf

1981, Steve Jackson published their seminal game, Car Wars. I bought the pocket edition about six years later, and we loved playing it. The one thing that slipped through our fingers was the content presented in chapter 4, simply titled “Characters”.

CW was a conflict simulation game, and the chapter on characters had one focus: to answer the question, ‘what happens when a vehicle is destroyed, but the driver survives?’ When the game was written in the late 1970s, it had never been the intention to write an rpg.

But still, players being players – they turned CW chapter 4 into a full roleplaying game. There were many groups in the 1980s who used the rules for roleplaying.

When a player wants to try something that isn’t covered by any of the skills in use in that campaign, the GM should fall back on “roll 2 dice and pray ” In other words: Require the player to roll 2 dice. The higher the roll, the better the result.

This is exactly the same method Arneson and the other Twin Cities grognards used.

How does the Car Wars Classic rpg work?

How would I tweak the system?

I wouldn’t change much. Each character has 3 “damage points”. Armor adds damage points. Choose 3 skills. Later in the game, you gain new skills or skill points. Skill checks are 2d6+skill = 7+. opposed skill checks are 2d6+skill, higher result wins.
Combat: opposed 2d6+skill, higher result hits and inflicts 1 to 3 damage – no additional damage rolls, they’re counterintuitive when you roll really high to hit and then roll 1 for damage or so.
Ranged Combat: referee tells you the number you have to roll on or above.