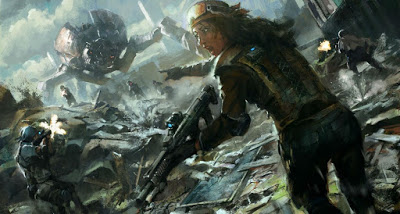 My roleplaying game socialization happened in 1984, with a game that used stats between 8 and 20, and roll-on-or-under saves. This mechanic is probably the single most important imprint on my gaming DNA.

Add hit points, and you already have a system that works.

The outcast-whose-name-shall-not-be-mentioned came up with a pretty cool idea on freeform rpgs many months ago. I’m riffing off of these now.

LEVEL
You start at 1.

STATS
Each player: Roll six times 3d6 and write down the numbers. Invent six stats, assign each one a number. If the referee thinks you’re trying to fuck with him, you might lose that stat. AND the number.

SKILLS
You get 10 skills, each linked to one of your stats. If you save against a skill, save against the stat+Level.

GEAR
Pick 2d6 items from an rpg book. Then, lose 1d6 of them. If gear can be destroyed, assign hit points to it. Or assign stats, just like characters have.

POWERS
Pick 1d4. These can be cyberware, mutations, spells, PSI, connections, special backgrounds, whatever your group thinks is Cool.

SAVES
Roll ad20 on or under the most appropriate stat. If you don’t have any, save vs. 4.

DAMAGE
Small weapons: 1d6; medium weapons: d8; large weapons: d10; some weapons might have smaller or bigger dice than that.

NO HIT POINTS
Damage comes off a random stat. One stat at 0: scratched. Two stats at 0: unconscious. Three stats at 0: serious wound. Four stats at 0: dead.

COMBAT
Save vs. your most appropriate stat, opponent does the same. The highest, but still successful roll hits and rolls damage.

Unimportant NPCs
Assign stats and numbers as you need them. Give them between 5 and 20 hit points. Make a KO save vs. 10 each time they are hit and have less than half of their hp left. or simply drop them after one hit.

Add-Ons
Instead of rolling damage and subtracting it from stats, simply make a save vs. the most appropriate stat. The referee may slap modifiers on the roll. A successful roll means you took the damage quite well. A failed roll means it got you good. The exact number of hits a character can take varies from setting to setting, but 4 is a good number.

Fatback sees T-Rex with a pistol closing in on him, draws his Browning Max-Power and squeezes off three shots. T-Rex also tries to shoot. As Fatback shoots three times, my ruling is that he has to roll with disadvantage (roll 2d20, pick the worse number).
Fatback: rolls save vs. is Shooting Pistols 15, gets a 12 and an 11.
T-Rex: rolls save vs. 10, fails the roll.
Fatback hits with all three bullets.
Fatback rolls for damage: 6,3,8.
T-Rex now has (20 hp – 17=) 3 hp left. I roll a save vs. 10 to see if he remains conscious, but I fail.
T-rex drops to the ground.