I’m no fan of adding big numbers in-game. To me, any number above 3 IS big. So, Troika! gets a new set of rules – but nothing on the character sheet changes, and just one more number is added.

SKILL
Skill in Troika! is used for all saves, so it’s a very important number. It’s rolled with 1d3+3, so it has a range between 4 and 6. Use Skill to make informed decisions about a character’s competence (positive or negative Dice Modificators). The number itself is NOT used in play.

STAMINA
I mentioned it several times here on the blog: for fantasy games, I want to have hit points. Stamina just so happens to be Troika!’s hit points, so I’m keeping this stat: roll 2d6+12. Also, I’m keeping the Troika! damage tables.

POSSESSIONS
Conveniently enough, Troika! provides a rule for starting gear. Of course, I’m using this, as well: start with 2d6 silver pence, a knife, a lantern&flask of oil, a rucksack and 6 provisions.

BACKGROUNDS
Determine your background, using either the book or one of the gazillions of available Troika! classes online.

ADVANCED SKILLS
Troika! uses Advanced Skills that range from a +1 to a +3 bonus. We’ll keep that, as well.

MAKING ROLLS
When casting spells, making saves, testing your mettle, roll 2d6+Advanced Skill against the referee’s 2d6. The ref might grant you a bonus on top. Higher roll wins.

Referees, feel free to slap other DMs on player rolls, and on your own rolls. Keep Troika! initiative. T

COMBAT: Fighting Dice
Compare the fighting abilities of the combatants with the following table.

The combatants roll their Fighting Dice against each other. Higher number hits and rolls damage.

Bottom line:
Use Troika! as-is, but use Fighting Dice for Combat4, and 2d6+Bonus against the ref. Use Advanced Skills as modificators for the roll. Add other positive or negative modificators for really simple or really hard tasks.

I could roll d66 to determine my background, but I’m picking one I discovered last Saturday on Troika! discord: the Man of Arms, written by Lejeune: 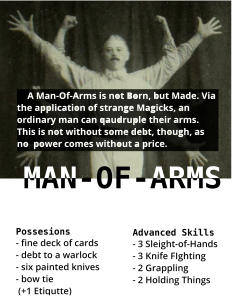