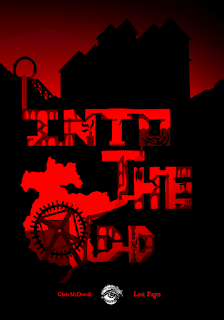 1) Ability Scores
Roll 3d6 for each, Strength, Dexterity Willpower.
If an Ability is 5 or lower, write on your index card (“character sheet”): “low strength”, or “low dexterity” or “low willpower”, or “weak”, “clumsy” or “weak-willed”, or something similar.
If an Ability is 16 or higher, write the opposite, for instance “Strong” or “Dextrous/Agile” or “Mind Master”, or something similar.
Be sure to jot down the numbers you rolled. You won’t need them in the game, but you need them to determine your gear.

The ref determines how long it will take to heal up.
3) Roll 1d6 and cross-index the result with your highest Ability score to determine your gear.

Let’s create an Into the Odd character!

Let’s say Genghis is duking it out with a nameless thug in an Octoberfest beer tent.
The ref says Genghis can surprise the thug with a sucker punch.

Genghis (rolls 2d6 and subtracts 1 because he’s weak): I’ma punch that guy in the face, like so (stands up and mimicks the punch), rolls 6

Referee: Genghis, you throw a mighty right hook from out of nowhere, but the thug somehow feels it and ducks, and right on time, he launches a counter-left straight that sends you a step back! You are not an experienced brawler, Genghis…

Referee: …and that’s why the thug decided to close in on you, pretty low, very quickly.

Genghis: Shiiiiit… what’s he doing? Can I recognize what he’s doing?

Referee: No. You can’t. His so quick, and you are just not experienced enough. Roll 2d6-1, buddy.

Referee: Wow! So he shoots for your legs, but slips somehow, and misses you by a mile. What do you do; Genghis?

Genghis: I whack him in the head with the… my stein! You want me to roll?

Referee: No, that guy slipped hard, really! You whack him in the head, and he crumples, as if someone had switched him off.