About three years ago, I published a free rpg called minimald6. It was a nice little success and spawned 31 hacks. Unknowingly, what I had done was I had written an FKR game before we started the FKR movement. 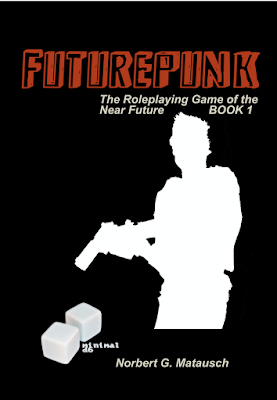 “Roll your attributes with 1d6 (strength, dexterity, health, courage, intelligence, tech). You are level 2. A name?”

For health, I roll a 1. That’s bad. So, my character is a sickly person. But for intelligence, I roll a 6. So we have the archetypical, clichéd brainiac in a weak body.

His name is Vince Golonian, aka “Silence”.

Every minimald6 character starts on Level 2, so I get to pick two things from the description above:

I pick “knows people, knows how to streetdeal”.

4) He starts with a “Working Stiff” wealth level: His apartment lease ends in 11 months, and he has saved 6000 Nuyen.

5) I think Vince has installed some cyberware. Let’s say 2: I roll a d66 twice and get 26 and 23:
a palm refibrilator (he had to use it on himself twice so far), and a gridcompass (internal gps system).
I like that! Of course, if Vince was a samurai or bodyguard, I would have picked cyberware that fits. It has to be dramatically appropriate.

knows people
knows how to streetdeal

6) Use the Landshut rules to resolve conflicts.