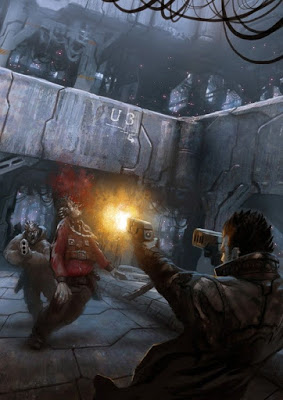 Diceless Dungeons is a gem. Way too few people know this roleplaying game, written by my friend James George. One of the reasons why people might not want to try it is because it’s… diceless. But it’s one of the most elegant and STILL old school-ish games I know.

And this is how it works:

I’m creating an adventurer. Every adventurer starts with ten health points and three talents. I pick Cunning (detect some vital clue once a day), Healthy (heals double wounds when resting) and Stealthy (hide from and sneak past enemies).

I could have also picked the sorcerer’s apprentice. And while in the basic rules, the apprentice is all you get if you want to play a magically-inclined character, it’s simple to change this class into a full-blown sorcerer. Casting spells is draining, and the character loses 1 health point when doing so.

Then, pick some equipment and you’re good to go.

But how does combat work?

Combat is divided into one-minute rounds. Depending on the strength and number of the enemy, it lasts shorter or longer. Fighting weak enemies takes 1 to 2 rounds, average enemies 3 to 5, and strong enemies 6 or more.

The DD rules state a very important rule then: “Thus, victory in battle becomes a matter of surviving to the end of the fight. But this is not without risk, because for every round spent in combat, the party takes one wound to be assigned to whatever character the players choose”.

The players describe what their characters are doing, the referee describes combat and wounds and injuries and blood and gore, and after the monsters have inflicted their total damage, the fight is over, and any player character who still has health left survives. Dead simple, but very, very elegant.

Every monster comes with a Damage Bonus that’s added to the base 1 damage it inflicts each round. A skeleton, for instance, has 3 Damage Bonus. That means it adds a total of 3 wounds to the number of wounds/rounds. Weak skeletons die after 1 or 2 rounds, and inflict a total of 1 or 2 wounds — but the Damage Bonus buffs this up to a total of 4 or 5 wounds.

The elegance of DD’s combat rules really shines when you take the “Pacing Encounters” rule on board: The referee can add rounds with zero damage to combat encounters. This breaks the pattern and destroys predictability of combats.

And NOW the secret: You don’t really need to PLAN zero wound rounds. All you need to do is this: Adjust the wounds inflicted by the monster to the narration of the players. Feel free to even increase total damage if they describe stupid actions. Feel free to decrease total damage for really smart decicisons. That’s all. All you need is the total number of wounds a monster will dish out. Everything else depends on the description.

I’m creating a Shadowrun character, and I’m translating the skills on the fly. I pick Smart (detect some vital clue once a day), Healthy (heals double wounds when resting) and Stealthy (hide from and sneak past enemies). 9mm Glock, a kevlar vest. 10 wounds.

My buddy is creating another adventurer. Acrobatic, Hardened (survive three rounds after death), Nocturnal (operate in total darkness). He is obviously some sort of Shadowrun physical adept. Ares Predator I. 10 wounds.

The referee sends a Strong Corp Security Team to kick our asses. It will inflict a total of 15 wounds if we go all in, exchanging bullets, maybe even 20 if we’re stupid enough.

If my buddy and me are acting smarter, ducking and weaving, shooting behind cover, the Corp Team might only do 10 wounds on us.

The rest is all narration and narrative positioning.