….you’ll ever need you can find here: https://matausch.wixsite.com/dospunk

They lost track of what really counted in the literature that spawned them: the story, the characters, the drama. Instead, we got pages upon pages of gear lists, “cyberware” lists, cyberdeck lists.

Instead of drama, action and character (which are, at least, sometimes, interchangeable in the novels), we got shopping.

Personally, I want that to be gone.

So we’re down to eight “cyberware” technologies suitable for the heroes mentioned in ALL of Gibson’s books. And only a couple of them is mentioned by brand name.

Now let’s take a look at the original Cyberpunk rpg (“2013”), written by Mike Pondsmith. Suddenly, we get four pages filled with more than 30 cyberware options. Plus, we have six pages of ice and icebreakers (I went into some detail about them yesterday) in the rulebook. That’s what I call ‘option bloat’!

But let’s not forget my beloved Shadowrun first edition. Let me count real quick: we get seven pages full of shopping lists for equipment and “cyberware” (more than 50 options just in that book alone), plus many dozens of pages filled with walls of text explaining their function. A bookkeeper’s wet dream.

As we all know, William Gibson greenlighted the Cyberpunk game. And so did Walter Jon Williams, whose “Hardwired” novels belong to the best cyberpunk books ever written. Williams wrote the “Hardwired” supplement for Cyberpunk 2013 himself. If you look at the “equipment section” in his book, you’ll find exactly one page with sample prices for 13 categories – one of them being “cybertech”, listed with four entries. That’s all you really need. 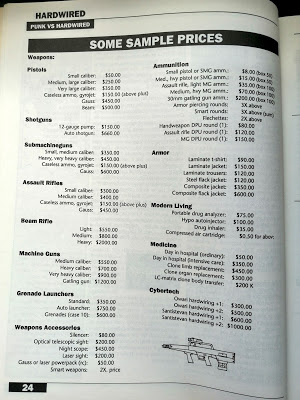 Do you remember the first Shadowrun trilogy? I do, and I have re-read it many, many times (and just yesterday, I downloaded the audiobook version on Audible). Those stories, ALL of the Shadowrun stories, are not about shopping. What remains after reading them is the memory of cool adventures, of characters overcoming obstacles.

THAT’s my cyberpunk. THAT’s my Shadowrun.

Last week, I modified an existing pbtA “move” for my Shadowrun.

Today, I’m changing it to fit into a truly FKR style game.

Spend 5 hold to find a safe exit or locate the CEO HQ.

Roll each time you navigate.
Before you start, I write down how many “wins” you need to get what you want.

If you roll higher, you win, and something advantageous happens: you might find something useful, or you might find clues as to where in the building your target is at the moment. To gain a really BIG advantage, you have win several times during your run.

If you roll lower, you lose, and I’ll send my guards, drones, and autodefenses: the works.

Re-reading Gibson.
If you want to play ICE like Bill, keep the following quotes from Neuromancer in mind:

With his deck waiting, back in the loft, an Ono-Sendai Cyberspace 7.  They’d left the place littered with the abstract white forms of the foam packing units, with crumpled plastic film and hundreds of tiny foam beads. The Ono-Sendai; next year’s most expensive Hosaka computer; a Sony monitor; a dozen disks of corporate-grade ice; a Braun coffee maker.

See? So my obsession with cassettepunk is pretty much spot-on. Ice on disks… how on earth can something as powerful and dangerous as ice fit on twelve disks? Simple. Here’s the reason:

“Just thinking out loud . . . How smart’s an Al, Case?”
“Depends. Some aren’t much smarter than dogs. Pets. Cost a fortune anyway. The real smart ones are as smart as the Turing heat is willing to let ’em get.”
“Look, you’re a cowboy. How come you aren’t just flat-out fascinated with those things?”
“Well,” he said, “for starts, they’re rare. Most of them are military, the bright ones, and we can’t crack the ice. That’s where ice all comes from, you know? (…)

“You got it. Corporate core data for Tessier-Ashpool S.A., and that ice is generated by their two friendly Al’s. On par with anything in the military sector, looks to me. That’s king hell ice, Case, black as the grave and slick as glass. Fry your brain soon as look at you. We get any closer now, it’ll have tracers up our ass and out both ears, be tellin’ the boys in the T-A boardroom the size of your shoes and how long your dick”

Ice is made by Artificial Intelligences. But it gets better:

Case sighed. “Well, I got a user-friendly Chinese icebreaker here, a one shot cassette. Some people in Frankfurt say it’ll cut an Al.”

Ice on cassettes. Of course. I know Godfather Gibson probably didn’t mean it that way, but that’s my selective interpretation of the source.

And ice can be brute force, or really sneaky:

“I did, once. Just an idea, back then. But that’s what ol’ Kuang’s all about. This ain’t bore and inject, it’s more like we interface with the ice so slow, the ice doesn’t feel it. The face of the Kuang logics kinda sleazes up to the target and mutates, so it gets to be exactly like the ice fabric. Then we lock on and the main programs cut in, start talking circles ’round the logics in the ice. We go Siamese twin on ’em before they even get restless.”

Another fun fact: You don’t read dozens and dozens of brand names for ice. We know Gibson loves doing that, but NOT for ice, and icebreakers. Ice is monolithic, off-the-shelf, illegal drek hot shit, and so are icebreakers.

Which brings me to a conclusion:

In my cassettepunk Shadowrun games, I won’t be using any brand names for ice, not even different kinds of ice, as both Shadowrun and Cyberpunk 2013/2020/3/Red are doing. Breaking or melting ice will be a single die roll, or, if it’s really tough, several dice rolls. The hacker/decker MUST be successful in every single roll, or the ice will do horrible things to him and/or his deck.

Time for an automated random table:

Yesterday, we played the fourth or fifth session of our cassettepunk Shadowrun campaign.

It was huge fun, the characters had one interesting fight against two corp goons (during which the troll ex-bounty hunter finally could show what he was made of… impaling a physad elf on his horn, is all I’m saying), and they finally gathered all information they needed to start the run.

I treated legwork very handwavey. If they narrated cool stuff and/or rolled well, I gave them a piece of information. This worked beautifully.

But then it hit me.

I could handle this way simpler.

And I remembered Ray Otus’s variant of the so-called “dungeon move” for Dungeon World. The premise is as simple as promising: How can we skip tedious dungeon crawls and cut right to where the meat is? I know, this sentence disqualifies me in the eyes of many OSR fans, but if I’ve always, ALWAYS, hated one thing about old school fantasy – it is the godforsaken dungeon crawling. It doesn’t hold any fascination for me. Okay, back to Ray.

For the Plundergrounds zine, Ray’s fantastic OSR zine, he wrote this dungeon move:

When you attempt to navigate the labyrinthine twists of the dragon hoard, describe how you do it, and then roll+INT. *On a 12+, hold 2. *On a 10+, hold 1. *On a 7-9, hold 1, but you encounter a hoard denizen and/or find yourself in a bad place. *On a 6-, the dragon is one step closer to detecting your presence and location! This is in addition to any hard move the GM has in mind.

Spend 5 hold to find an exit, locate the dragon, or find her nest.

So, let’s adapt this baby for Shadowrun:

Spend 5 hold to find a safe exit or locate the CEO HQ.

…and it was so good!

Last week, we started a new Shadowrun campaign. And with campaign, I mean campaign, a long-term series of adventures. Modern Shadowrun is an abomination to me; what makes me grin with enthusiasm is the setting of the first edition. I’m taking one step further and cassettepunk it. Shadowrun used to be a game about underdogs, not about high-tech super runners doing their jobs. That’s excruciatingly boring. Our Cassettepunk Shadowrun is old school in every aspect: underdogs running in the shadows.

The game is set in Hamburg, Allianz Deutscher Länder (Allied German States), in the year 2050.

Richard Moosbichler, an expat from Munich. Middle-aged. Moved to Hamburg for a job and got stuck there. Orc wolf shaman, Runenthing member.

Tiberius, former Troll bounty hunter who lost everything that was dear to him. Homeless.

Blaubub, a rigger and friend with Tiberius.

The runners are meeting a connection at a night club. Richard is scanning the area astrally and notices five persons hiding, two at the main entrance, three at the emergency exit in the back. Using high-proof whiskey, paper towels and empty beer bottles, they assemble a handful of Molotov cocktails. Richard then “calls his pack” (evocates two wolf spirits), while Andreas and the connection hide behind the counter. Blaubub is also seeking cover.

Then, Blaubub throws a few Molotov cocktails, Richard sends the wolf spirits out the emergency exit. Suddenly, an infernal burst of autofire: One of the opponents has a frigging gatling gun. And he is razing the entire back alley with it. The runners: fuckfuckfuck we’re dead, frantically diving behind tables, while the gatling is buzzsawing the interior of the nightclub to pieces. Fiery hornets of death. My players: enthusiastic, yelling over each other like kids in the playground. This is fun!

Driven by the courage of fear… Blaubub leaps towards him, unarmed, with the intention to prevent gatling guy from shooting again. Almost at the same moment, Richard also leaps. Both guys manage to knock the gatling gun to the side, against the wall. Gatling guy tries to recalibrate, and Richard… everything in slow motion now… shoves his gun in gatling guy’s face and pulls the trigger. Blood spraying, the sound of a heavy body hitting the asphalt. Then, silence. My players erupt in laughter. That’s our Shadowrun. And that’s why I love it so much.

No dice were rolled. With dice, it would have been impossible to keep up the pace and the sheer craziness of that fight.

It was all a natural conversation. I gauged how competent or incompetent the player characters were and deducted the consequences of their actions. This is how we played almost all our games since 1991. Then, a couple of years ago, we started rolling dice again. Very simple stuff. But this session tonight… has reminded us, vividly so, why we are diceless freeform roleplayers.

We’re back, and it’s the best thing that could happen to us.

He has full-spectrum optics built into his eyes, TV skin, and a pleasure amplifier in his brain.

A man in his thirties, magically gifted: a Corporate Dog Shaman. He’s lost everything he loved, and has no fucks to give. He is motivated by greed, an overcompensation for his tragic loss.