Professor MAR Barker started it. He started creating his world Tekumel in the 1940s and kept adding things and adventures to it till he died in 2012. That’s A LOT. Probably there’s no other work of imagination as developed as Mr. Barker’s world.

When original D&D was published, Mr. Barker tried to adapt the game to Tekumel, so other peoplecould go on adventures in this fantastic world. It was a mediocre success. So he developed his own set of rules, which is still in use today, played by people like Chirine ba Kal and Bob Meyer, to name just two. Chirine has told us again and again that Gary Gygax and Dave Arneson used these rules (or very similar ones) as well.

What you’re about to see is NOT the cover of the rulebook. It IS the rulebook. These rules have been in use for at least 30 years. 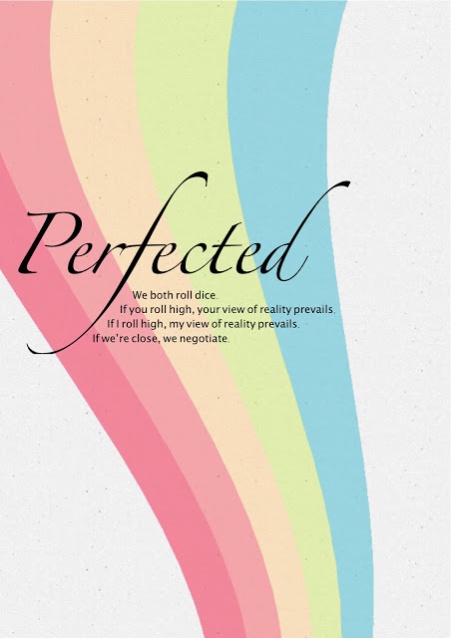 The interest in the rpg community in super-simple, super-lite rules seems at an all-time high at the moment, and personally, I think that’s good, very good indeed.

As you might have guessed, my favorite taste of rules-lite is Perfected, or to be more exact: opposed rolls. Using opposed rolls cut out two things that I don’t like in rpgs: math. Checking stats to see if I rolled high or low enough.

My most downloaded rpg, with thousands of downloads, is Landshut, a Free Kriegsspiel Revolution game on one page. You can grab it for free here: https://darkwormcolt.wordpress.com/the-landshut-rules-free-kriegsspiel-rules/

Another rpg system using this method is the brilliant Sword&Backpack, written by Gabe Soria. Check it out here. The rules? Player character tries something, referee tells him what to roll with a d20, or rolls against them. Done.

Cecil Howe, he of Hex Kit fame, made a booklet version of Sword&Backpack, and it’s a beauty to behold. The booklet version adds a rule: Whenever a character is trying something that is appropriate for their background or profession, add 5 to the d20 roll.

Cecil also published a zine for Sword&Backpack (unfortunately only one), called Peril, and yes, it’s good! In Peril, Cecil also introduced a new concept he calls “Difficulty”. To quote: “This is the number of combat rounds a monster can lose before it is defeated, think of the D as standing for difficulty. The number can be any number, not just one. Really tough monsters will have a high number, and really flimsy monsters will have a low number. “

Bob Alberti is the treasurer of the Tekumel Foundation. He played in Prof. Barker’s game for over 20 years. His ruleset is, as you might have suspected, similarly simple. To quote: “You have dice to resolve any questions (01-10 good, 90-00 bad, use common sense). (…) All the other crap – character stats, encumbrances, combat rules, etc., are the tools of the rules-lawyer, and not worth the attention of dignified persons.”

Today, Claytonian published his one-page rpg “The Party“. And lo and behold, it uses opposed rolls to solve everything. Check it out here.


Character Creation, how we actually, really play it
Procedures of Play
Fights
Opponents roll 2d6 against each other. Add +1 to +3 for Good Things, and subtract 1 to 3 for Bad Things. For instance, an “agile” tax collector with “saber-fencing” skill would add +2 to the roll, while a “ridiculously weak” rat-catcher would subtract 2 points.

Simple mnemonic: you add or subtract as many points as the skill or attribute has words to describe it – so, “longsword” adds 1 point, “very quick” adds 2 points, “terrible constitution” subtracts 2 points, “fucking weak clown” subtracts 3, and so on.

The side with the higher sum hits. Ties mean both sides hit each other simultaneously. A combatant with zero Hit Points left dies.

Weapon damage is 1 for small, 2 or more for big weapons. If you roll doubles, damage doubles, as well.

Fights work exactly like other Procedures of Play, described above,
OR: roll dice against each other, higher result hits.

And this leaves us with exactly the way we’ve been freeforming/free kriegsspieling for years: Play worlds, not rules. Read all about our take on the earliest forms of roleplaying in the following posts:

Yesterday, I wrote about the stone age of roleplaying games. Today, I’d like to share with you how I’m handling experience in my games.

A few days ago, I asked my fellow Google+ gamers: How do you level up in your game? And: why? A whopping 76 percent answered “XP”, while the rest said they used a milestone rule of some sort. I think this is interesting and telling at the same time. For the majority of players, Experience Points seem to be inextricably intertwined with roleplaying. But in the early days, XP didn’t exist.

How did Dave Arneson referee Blackmoor (at least, at one point in time)?

I was never good at giving out xp. Or maybe more correct, I never bothered. It always seemed not worth the effort, and so I pretty soon switched to giving out experience levels when it felt right to all of us. Then, in the early 90s, along came Theatrix, a fantastic diceless rpg that still makes my spine tingle. Theatrix favored a solution called “dramatical appropriateness”. When it was dramatically appropriate, characters gained a new experience level. This is how we’re handling experience to this day.

… and I don’t mean The Flintstones here. What really is driving my interest these days (in terms of roleplaying games) is to go as far back as possible with the rules. And since it’s been established by amazing researchers in the field that Original D&D was not the first rpg (not by a long shot even), I’m slowly (hex) crawling my way to The Origin of Our Hobby (TOOH, ha!, I like that).

We know that Dave Arneson didn’t have a single “true system”, but he changed and switched and tried and created on the fly, before and after his sessions. We know that Dave Wesely did the same with his Braunsteins, a game with no “official” rules that were available for the players. We also know that Phil Barker, eternally renowned for the beauty that is Tekumel, used a very freeform set of rules that didn’t care about the typical D&D-isms like hit points and stats or saves, but ruled them on the fly.

It’s also a given that neither Dave Arneson, nor Gary Gygax, nor Phil Barker used the rules they published (except Prof. Barker when it came to military simulation). Jeff Berry (also known as Chirine baKal), one of the old-time grognards who played with Arneson, Gygax, and Wesely, and was a regular, trusted member of Phil Barker’s rpg group has this to say about the rules the founding fathers of roleplaying games used at their private tables:

Phil Barker, the man himself, about rules:

Bob Meyer, one of Dave Arneson’s longtime players and traditional referee of the Annual Blackmoor Game:

13 years ago, W.D. Robertson wrote “Fast, Easy D100Narrative Adventures for Empire of the Petal Throne“. Check this pdf out, it’s worth it.

All of this makes it really easy to come up with ideas for a (as Chirine ba kal called it) “pre-school” (as opposed to “old school”) session:

“Doing it by the book” was impossible; the book – and the game rules – hadn’t been written yet. The GMs of the day came up with adventures and worlds that they were set in, and we played our Faferds, Grey Mousers, Conans, and Belits in these new worlds with all the gusto and swashbuckling vigor that we could. It was, as I’ve suggested, ‘lighting in a bottle’. We learned to run our own campaigns by being apprentices, and we in turn had our own students.

I will say this: I made the same experience with this style of play. One of the best rpg campaigns we ever played (it lasted five years) used similar rulings.

The image you’re seeing IS the entirety of the rules. Have fun.