Skip to content
I think it was Jeff Rients who called the set of D&D rules a DM could remember and was actively using at the table, “walking-around D&D”. Walking-around D&D is what’s left after you finish reading the rule book; it’s the core of your personalized D&D.
I am inclined to call my version of Warhammer frp “walking-around Warhammer”, even though that’s not quite correct. I need almost nothing that’s presented in my Warhammer FRP 1e book: careers, age, race, maybe, maybe skills, and info on the world. Everything else, all the rules and tables and stuff, everything else had to go.
In the first edition rulebook, preciously little information is given on the cities of the world, for instance. And Gods of Chaos? Oh my! A half page, and a reference to the “forthcoming Realms of Chaos supplement”.
But in all honesty: When I’m GMing, I might look up the rough description of a city, or general info on a country. Tops. What I need at the table is the executive summary of the Warhammer world, not the Encyclopedia Britannica of Warhammer.
And rules? Ha, RULES?
Well, we’re using Risus to play Warhammer right now. Go figure. And I’m fairly certain that within a few sessions of play, I’ll be switching back to Sword&Backpack because all we need to know is one thing: Is what the character does successful? Everything else is creativity-in-action.
Maybe it’s okay to call it “walking-around Warhammer”, after all. 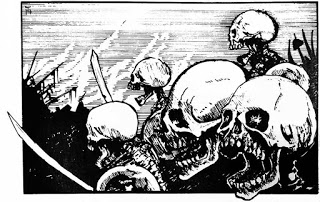 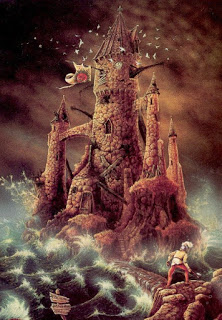 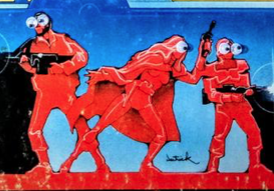 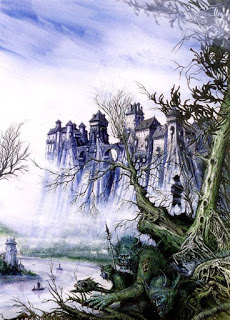 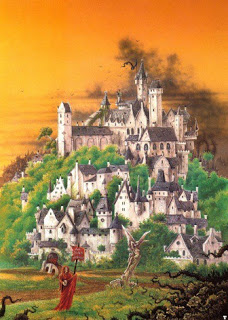 This post really is just an exercise in flexing my writing muscle, so feel free to ignore it 🙂

Recently, I posted about playing Warhammer with Risus rules. It works beautifully, it’s quick smooth. It will also change during play because that’s just what happens when I’m refereeing games. With this in mind, let’s try a Risus Warhammer character with Bloodstone.

Please note that the skills mentioned for the Soldier cliché are just there to give the player an idea of what Durand is capable of doing with this cliché.

Now, let’s take a look at the Bloodstone character creation:

As you can see, it’s almost a one-to-one translation. That was to be expected.

Over on the Discord Into the Odd server, Wizard Lizard and I are exchanging ideas of how to make free kriegsspiel and/or proto-rpg even cooler. Since we both are fans of Warhammer (the setting, not the system), we thought of ways to make violent fights really, really memorable and, well, messy. Warhammer is not exactly like OD&D in this respect. The interesting thing is, of course, you can use this system without the optional ‘Gore Die’ rule and play regular elfgames and science fiction stuff with, as well.

I tentatively call these simple rules “Bloodstone” because Warhammer + Braunstein, you know.

Character Creation, how we actually, really play it
Procedures of Play
Fights
Opponents roll 2d6 against each other. Add +1 to +3 for Good Things, and subtract 1 to 3 for Bad Things. For instance, an “agile” tax collector with “saber-fencing” skill would add +2 to the roll, while a “ridiculously weak” rat-catcher would subtract 2 points.

Simple mnemonic: you add or subtract as many points as the skill or attribute has words to describe it – so, “longsword” adds 1 point, “very quick” adds 2 points, “terrible constitution” subtracts 2 points, “fucking weak clown” subtracts 3, and so on.

The side with the higher sum hits. Ties mean both sides hit each other simultaneously. A combatant with zero Hit Points left dies.

Weapon damage is 1 for small, 2 or more for big weapons. If you roll doubles, damage doubles, as well.

Optional Rule: Gore Die
As mentioned in the intro, we’re big Warhammer fans, so it comes quite naturally that fights have to be… a fucking mess, frankly. In a fit of inspiration, I came up with a rule called the Gore Die. Remember how you roll attacks with 2d6. These two dice should have different colors. ONE die is the Gore Die. The higher that die, the messier, bloodier, gorier your hit is. Note that a gory, bloody, bloodspraying, disgusting hit will not kill the opponent if he still has Hit Points left – but it will definitely put negative modifiers on his next attack roll, movement, abilities, skills and so on. Only when Hit Points are reduced to zero, a character dies. To give you a few rough ideas for Gore Die results:

Gore 7? How? This is another optional rule: When a character is down to 1 Hit, the next attack that takes him to his gods has Gore Die +3.

Haans Fiddlewurm vs Angry Goatman, Round 1.
Goatman charges Fiddlewurm, trying to pin him to a tree. Fiddlewurm, being a bastardly fella, rolls to the side after swinging madly with his axe in the goat’s direction. (Goatman rolls a total of 5: 3 on his Gore die, plus 2, and Haans a 9 (6 on the Gore Die). The Beast screeches madly, the axe stuck in its skull. It stumbles around the tree, spraying blood everywhere.
Round 2. Noticing the foul creature is blinded by blood and pain, Haans runs towards it and messily pulls out the axe, tearing off bits of skull and brains, covering himself in humors as he does so. The goat-thing’s noises stop abruptly as it falls limply on the leaves-covered floor. (Haans 7 (1 on gore die, 4 on normal die, plus 2 because Goatman is seriously handicapped and relatively easy prey), Goat 2). The referee decides to give goatman the coup de grace here because he rolled the worst possible result on 2d6. Had goatman rolled more, the fight might have gone into the third round.
Two sample characters, written by Wizard Lizard:
Snori Durak, Man-at-Arms
Bio
A hairy, middle-aged dwarf with a healthy distrust for humans
Skills
Tough (player rolled 10 for “Toughness” attribute, all other stats are average), has darkvision and excellent hearing. Knows mining, metallurgy, horse riding and war
Trappings
Warhammer & shield, crossbow (19 bolts), knife, full suit of mail with helm.
Sturdy military attire, slingbag with cutlery, tankard, blanket and tinderbox.
8 gold crowns
Carina, Poacher
Bio
A young and petite woman with silver hair and large hands, from a family of six in Altdorf
Skills
(here we have a character whose player has rolled average for all attributes; thus, none is listed on the character sheet)
Excellent sight. Knows how to scale sheer surfaces,
hide and move silently in the woods, find and follow trails, herb lore,
finding, disarming, setting up traps and how to use a woodsman’s axe.
Trappings
Two-handed axe, arming sword, knife and a leather jack.
Broad hat and travelling cloak, heavy boots, backpack with blankets,
tinderbox, cooking pot, a flask of fresh water, six silken tissues,
a card engraved with the Valantina Gang symbol, a lantern and a flask of oil.
94 gold crowns. 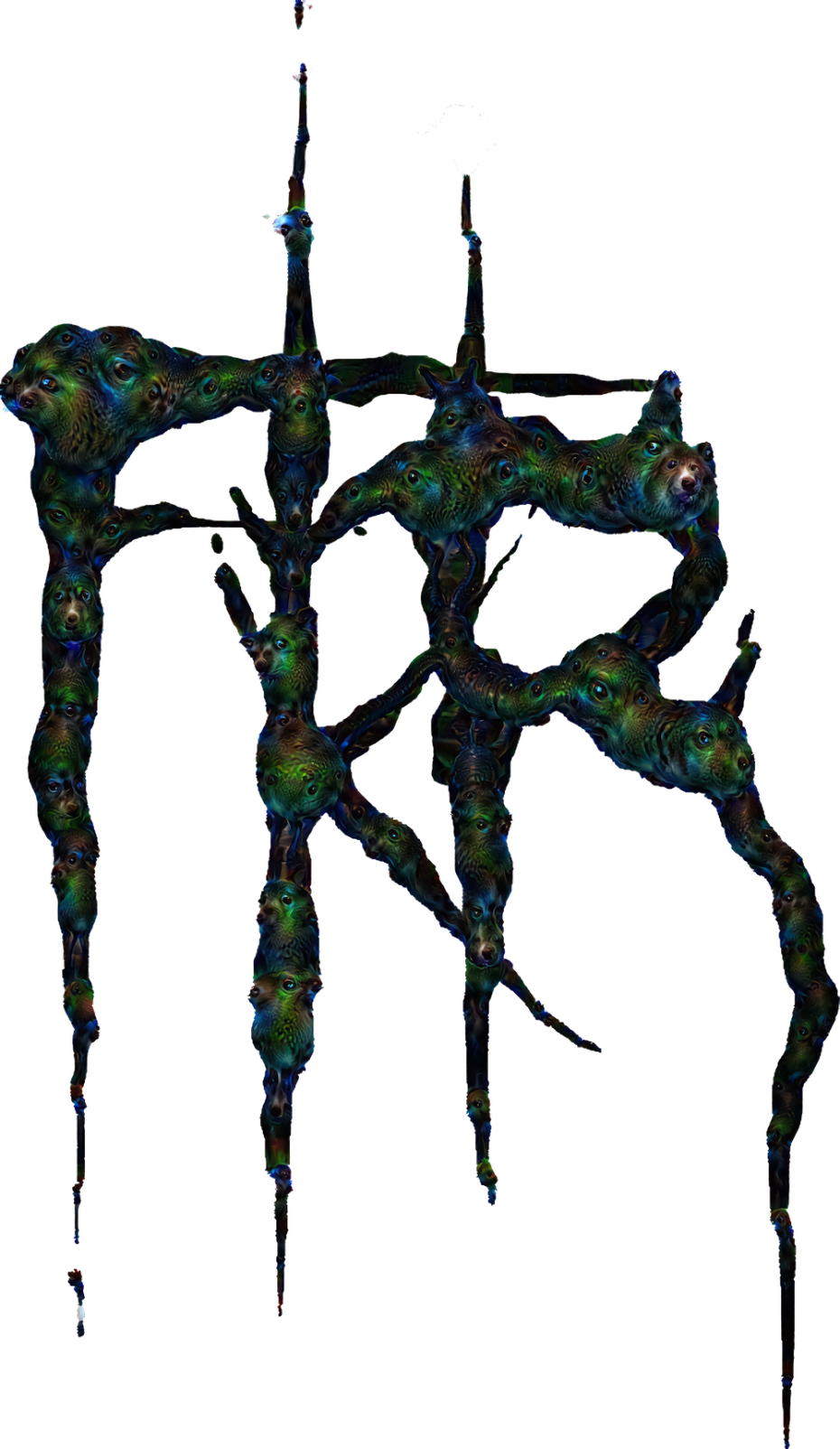